THE REBELLION OF 1798 IN THE O'BYRNES COUNTRY

The year of I798 was one of rebellion, part of an upsurge of unrest that swept through Europe in the late I8th. cent. There were three major theatres of unrest in Ireland all linked through the Society of United lrishmen - Antrim, South
Wicklow, Wexford and later with French interception - Mayo. South Wicklow and Wexford despite having the highest percentage of protestants outside of Ulster and being seen as the most secure counties , were drawn into the rebellion by many factors, the Byrne connection - Garret of Ballymanus and his cousins William Michael Byrne and Miles Byrne all leaders of the '98 rebellion in this area, but it is Garret's brother William " Billy" Byrne who was to become one of the most romantic ﬁgures of '98, his vision and role immortalised in stone, story and song.

Billy was bom in I775 into a family steeped in nationalist tradition believing to have been descended from Reamonn ( Redmond), son of Feagh mac Hugh of Glenmalune and whose ancestors included Hugh Byrne, MP for Macreddin in the parliment convened by James I l in I689 but who was later outlawed for treason by King William. Billy was the youngest son of Garret Byrne and the great great grandson of Hugh Byrne, MP. Billy's claim to fame rests with what happened after the rebellion, particularly his trial in I799. Although a leader of the Ballmanus contingent and famous for riding into camps of battles shouting" Up Ballymanus" thereby setting a precedent and rousing morale throughout the camps, he played a less prominent role in the '98 than Garret or Miles Byrne.

Billy was arrested in Francis St. in Dublin in May I799 and conveyed to Wicklow to be tried before a court martial. The report of the trial proceedings indicated his joining the Wieklow Yeomanry in late '97 and his taking exception to the wording of an oath and his expulsion in Feb '98. Billy then retumed to Ballymanus and joined in preparations for the rebellion subsequently taking part and leading his men in various engagements. He was convicted of being a principal rebel leader at the Battle of Arklow and Vinegar Hill and sentenced to death, which shocked the ordinary people of the time. '

Efforts to obtain a pardon were put in motion particularly by his sister Fanny, but despite their best efforts it was ultimately his involvement in the buming of Captain Thom. Hugo's property because of earlier land disputes with his father and the buming of Rev. Begley's property outside Arklow which inﬂuenced the final decision. 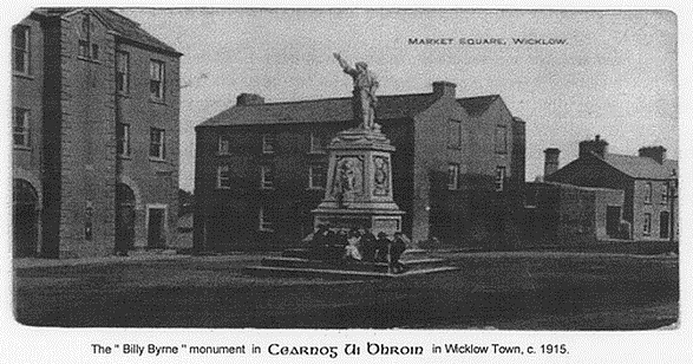 William " Billy " Byrne was executed on the 26th Sept I799. He died unmarried in his 24th year. His final burial place has remained shrouded in mystery. some saying he was buried at Wicklow Abbey alter being led through Wicklow town to his execution. Others saying he was buried outside the Gaol and some saying he was removed from Wicklow at the dead of night and brought to Rosahane, the family burial place, thus no doubt adding to the folklore that inevitably built up around this charismatic ﬁgure. Others who paid the supreme penalty of execution and played a more prominent pan in the rebellion are long forgotton but Billy's fame as a heroic ﬁgure has lasted 200 years, in some way due to the popularity of the Ballad of Billy Byrne, a commemoration to his popularity and to the revulsion of his sentence.

Billy's popularity was also fanned no doubt by descriptions of his appearance. Fr. Grant , PP. of Wicklow described Billy as one of the ﬁnest men he ever saw standing more than 6 feet tall. Miles Byme commented on his popularity- " he was amiable, handsome. powerfully strong and well proportioned 6'- 6" in height ”, the author Dickson
commented on him thus" l wonder how any young lady could look on him without being in love with him".