The sept families of the O' Byrnes of Leinster. 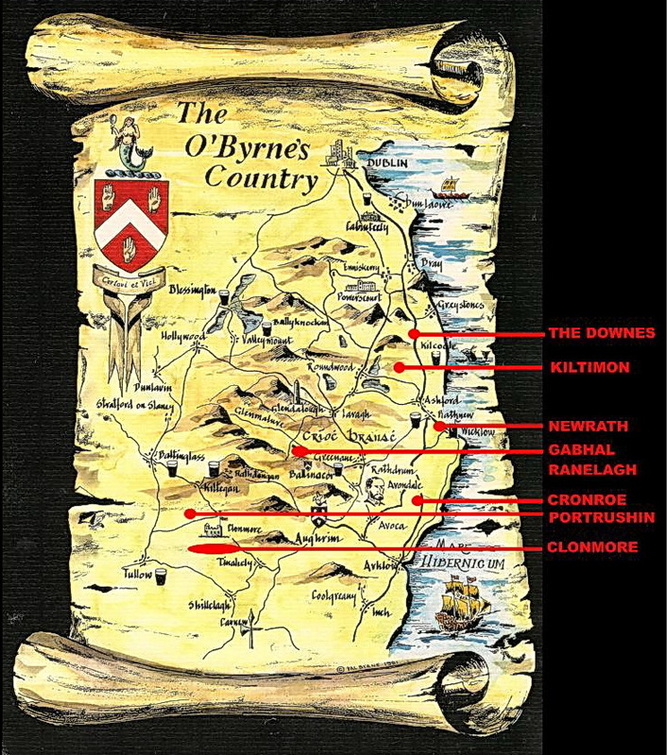 The map shows the location of the various septs of the O'Byrne in Wicklow and Carlow around 1500ad.

CRIOCH BRANACH      The O'Byrnes and their Country    by  KENNETH NICHOLLS
Crioch Branach or 'the Byrnes Country', the territory ruled in  the fifteenth and sixteenth centuries by the chiefs of the O'Byrnes, extended  from the furthest south-western confines of the modern county of Wicklow to the  little river which from the Glen of the Downs - the Downs itself, Dun Callighe  Beara. ,was the seat of one of the principal O'Byrne septs - to the sea near  Greystones. On the west in this region, it was bounded by the upland O'Toole  lordship of Ferter around the present Roundwood, but south of Glendalough it  extended to include the mountain country up to the watershed. Comparison with  the modern all of boundaries is difficult: the barony of Arklow, created by  Tudor administrators, included not only the Butler lordship of Arklow, inhabited  by freeholders and detained until 1525 by the MacMurrough kings of Leinster
themselves, but also a large section of Crioch Branach; while on the the present  barony of Ballinacor South includes the district of Toorboy, the inheritance in  the sixteenth century of the O'Hea family, but apparently under overlordship of
the O'Tooles. On the other hand it is probable that before the of the Butler  power under Piers Ruadh in the early 1500s Clonmore and, possibly at Tullow  itself, had passed into the hands of the O'Byrne chiefs as had into those of the
MacMurroughs: we know nothing of the history of Tullow during the fifteenth  century, but on balance an O'Byrne occupation, rather than MacMurrough, seems  the most likely. Presumably in the 1520s the O'Byrne chiefs, like the
MacMurroughs, found withdrawal on good terms a preferable alternative to  confrontation with the reviving Butler might.
Within this area the branch of the O'Byrnes known as the Gabhal  Raghnaill ( Gowlranell) exercised a sub-lordship important enough to be  separately listed in 'A Description of the Power of Irishmen' which was  probably drawn up in the 1490s. Their territory, known as Ranelagh  (Raghnallach), was discontinuous, including not only the mountainous territory centred on Glenmalure but also the district known as Poble-Kilcoman in Cosha,  centred around the parish church of Kilcommon near Tinahely but surrounded on  the north and east by lands under the direct control of the chiefs of Crioch  Branach and largely belonging to members of its chiefly septs. It would seem  that the consolidation of the territory under the rule of the Gabhal Raghnaill  was of late date: even at the end of the sixteenth century their main centre at  Ballinacor in Glenmalure was claimed as their inheritance by members of the  branch known as Gabhal tSiomainn, the 'Coultemans' who by the early fifteenth  century had largely moved westwards to become subjects of the MacMurroughs. In  the second half of the sixteenth century the destruction of the O'Byrne  chieftaincy - an act of policy on the part of the Dublin administration which  may have only completed a process of disintegration brought about by the lack  of a single dominant chiefly line - coupled with the immense military strength  of their mountainous and forested homeland, enabled the Gabhal Raghnaill  chiefs, Hugh McShane and his son Feaghe McHugh, to vastly extend their power.  By the 1560s they were levying protection money' over a wide area of Leinster,  and their successful defiance of the Dublin administration provoked paroxysms  of fury, as when the retiring Lord Deputy, Sir Henry Sidney, recommended to his  successor Arthur, Lord Grey de Wilton, 'Thextirping of those caniballs of  Goulranell' and referred to them as 'these vermin'.' More prosaically, twenty  years later Sir George Carew wrote that 'of all the septs of the O'Birnes this  sept of the Ranelaghe is the worst and basest, but of late years they have been  of greatest power'.' Probably because of their position as a semi-autonomous  sub-lordship the Gabhal Raghnaill, at least in this later period, were outside  the circle of competitors for the chieftaincy of Crioch
Brannach.
Crioch Branach : the O’Byrnes and their country.
Ken Nichols, Feaghe McHugh O’Byrne: the Wicklow Firebrand. .
The Journal of the Rathdrum Historical Society, Volume 1, 1998