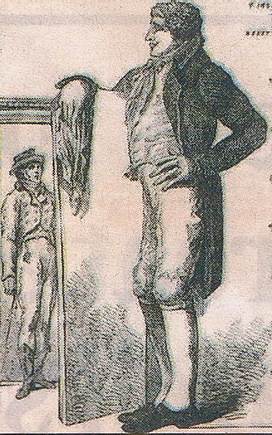 In London the  long brown bones of Charles Byrne, filling up a glass case in the College of   Surgeons, are one of the few surviving exhibits from the collection of human  oddities gathered together by the famous surgeon, John Hunter. Nearly all the  rest of it was bombed during the Second World War.
Byrne also had a   tragically short life, dying of tuberculosis. He was born in 1761, two years   after Corny Magrath died, in Littlebridge near Derry. The district bred giants,   for five miles from his birthplace there were two others named Knife. According   to local rumour, the Knife brothers and Byrne were all conceived on top of a  haystack. From an early age  it was clear that Byrne was simple, and the tumour on his pituitary gland that   stimulated his unnatural growth affected his intelligence. Symptoms of  consumption also showed early and he took to drink. By then he was well over  seven feet in height and his hands were eighteen inches long from the wrists to  the middle finger.
He first went to   London in 1782 where he teamed up with Count Joseph Borulwaski, a three-foot   Polish midget, who arranged his first appearance before the London public in   April that year. The Morning Herald made an announcement about 'the Irish  giant, to be seen this and every day this week in his elegant room at the   cane-shop next door to Cox's Museum, Spring Gardens: Mr Byrne the surprising   Irish giant, who is said to be the tallest man in the world'. The showing of  Charles Byrne attracted wide publicity; People flocked to pay their money ,  half a crown a huge amount then, and see the pathetic shambling figure dressed   in a Cutaway coat, cravat, and tricorn hat, 'not well built, his flesh loose,  and his appearance far from wholesome... he is an ill- bred beast, though very  young'. On one occasion he appeared with two other giants of minor stature at  the Haymarket in a panotmime named " Harlequin Teague or the Giant's  Causeway"  Elsewhere in London Dr.  James Graham, who with the aid of fair Emma, later Lady Hamiltom, did business  with his celestial bed and offered the use of it free of charge to the young  giant, together with a female companion. Byrne declined, on the ground that he was ' a perfect stranger to the rites and mysteries of Venus'.
By this time he  was dying of tuberculosis and alcoholism compounded by melancholia. The news  that a rival Irish giant, Patrick Cotter O'Brien, was appearing in London with  the claim that he was eight feet three and a half inches tall and a descendant  of Brian Boru was too much for him.
The idea that his   body would end up in a museum, or that it might be dissected by anatomists   horrified him.  After the famous  surgeon Dr John Hunter offered him a large sum for his body, which he passionately refused, the surgeon hired a man called Hewison, who began to  follow him everywhere. Meanwhile he was making elaborate arrangements to cheat  the bodysnatchers. He ordered a lead lined coffin and found ten Irish friends who  swore that when he was dead they would put him inside and sink him at the mouth  of the Thames. A group of Hunter's students heard of this plan and said that  they were constructing a diving bell to fish him out of the muddy estuary.
The sudden loss  of his savings of £770  in a tavern started Byrne on a bout of gin which killed him. He died  in May 1783, at the age of twenty-two. Throughout his final illness Hewison had  been shadowing him, and on the night he died the surgeon's man approached a  member of the undertaker's guard, one of Byrne's friends, who sat drinking in a  tavern while off duty. He offered a large sum of money, said to be £500 to £800,  for the corpse which was accepted and so Charles Byrne," The Irish Giant "  became an exhibit in   the Hunterian Museum in the Royal College of Surgeons , London.   May he rest in peace.
An Leabhar Branach,  (c) 20th July 2011