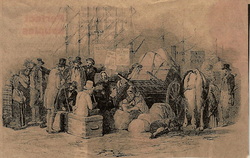 After his father's untimely death in France at the age of 40 years, Gerald continued the expansion of the Sleaty estates. On the 6th June 1829 he took
a lease from Alexander Humphreys and Richard Dunne of 42 acres of land
at Sleaty to be held by three lives renewable forever. Together with this was the addition of another 19 acres 2 roods and 20 perches adjoining these lands, with all houses and buildings.
Because of his now consderable property interests Gerald was able to quaify
for a further step up the ladder and he applied for a 'Certificate of a Rent-charger, Freeholder or Leaseholder' on 12th October 1832. As a freeholder of the yearly value of £50 he had the right to vote and this certificate registered him as a voter for Queen's County. He had to attend and present his case at the Special Sessions held at Portarlington in order to obtain this. Being a freeholder, the novous homo was one of the few who was qualified to act as a justice of the peace, to vote for a member of Parliment, and to fill the office of Sheriff.
As such Gerald became part of the upper establishment and possibly a small despot in his own part of the country. A large landowner would have had it all his own way and no notice would have been taken by the Castle of any complaints if such ever succeeded in arriving there.
So by the end of the 1830's the Byrne's of Sleaty had arrived !
In 1842 Gerald married Eliza, daughter of Paul Bolger,Esq, a merchant of Enniscorthy, Co. Wexford
This was a time of relative prosperity and land speculation was rife in Ireland but in 1845 the potato crops failed and started what is now known as the Great Famine of 1845/50. Income upon which the landed gentry depended on to support their usually lavis life styles, slowly but surely diminished and ultimately stopped. This was disastrous for Gerald who was fuelling his speculation probably with hefty mortgages to expand his empire.
In 1850 his younger brother Charles, having no further future in Sleaty emigrated to the United States. (of whom, more later)

Gerald in turn left for America, on his own, in 1852, two years. following his younger brother Charles. It is recorded that both Charles and Gerald were baptised back into the Roman Catholic faith in Carlow Cathedral before they left.

Gerald probably met his brother in New Orleans and may have been advised to seek his fortune further up on the river Missippi in Arkansas. He appears to have settled and may have obtained land in Lisbon, near El Dorado( named after the lost city of gold! ), Union County, State of Arkansas.His purpose was to either economically support his family or more probably to eventually resettle his family there. Unfortunately he died there on the 4th April 1858, at the age of 54, in the home of his honorable friend Squire Garret Gatlen, ironically his death was the final ruin of the Sleaty estate. There is no record of his will, if any was made.