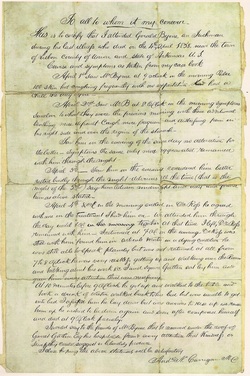 Death Certificate of Gerald from Arkansas
Eliza stayed on in Sleaty with her children and her sister in law, Mary( of whom,
more later) but with the death of her husband she could no longer sustain any any hope of remaining on in Sleaty. 1849 the Encumbered Estates Act was enacted , designed to simplify procedures by which purchasers might acquire forfeited estates. They put in motion the acquisition of the Byrne's property. Because the owner, Gerald, was dead the inheritance fell to Alfred, the eldest son. At that time Alfred was underage and on the 6th of July 1861 he was made a guardian of the court. The properties were then sold by public auction on the 2nd July 1864.
Eliza left Seaty along with her sons, Alfred and John and managed to obtain a position as Matron of the Poor Law Union in Kilmallock, Co. Limerick and so ended the Byrne's involvement in Sleaty, after 150 years.
Mary went to live with her uncle in Rathrush and then opened a drapery shop
in Kingstown ( Dunlaoire, Co. Dublin)where she died. She had an annuity from the Sleaty estates. Eliza went to join Mary in Kingstown, where she died.
Emily and Mary Clare also joined her, where they died.
Alfred joined the British Army in Kilmallock and enventually retired and died in Alderney. John lived on in Limerick, where he died. 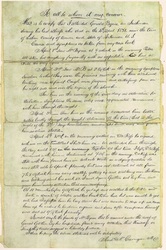