's The memorial  stoneof  Charles was unearthed by Eddie McDonald and Val Byrne in  1992. The stone, which was completely covered ove,r was in the old Graveyard in Clonmore.
The stone had been badly mutilated probably by United Irishmen rebels in June 1798 retreating from the Battle of  Hacketstown when they also burnt the Protestant Chapel , subsequently rebuilt across the road from the Old Graveyard.
Charles who had embraced the ' established ' religion and  took part in the previous massacre in the Battle of Carlow, 25th May 1798  would not have endeared himself  to the rebels.
According to Ryan's  History of Carlow  the Vault of his father and family was also mutilated. 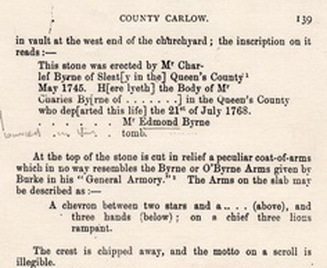